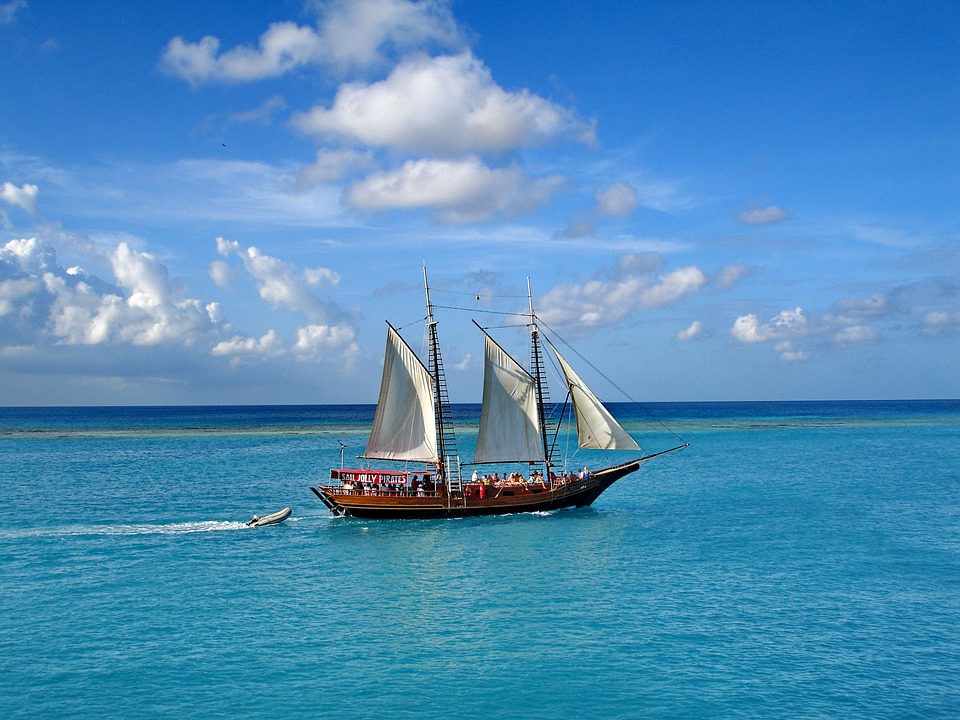 White beaches, a light-blue sea and sun are what Aruba has to offer mainly. But there are also sights on the island: white-lined Dutch gables in pastel colors, an old Frysian windmill, a lighthouse, lots of cactuses, sand dunes, a wild east coast, and National Park Arikok, which takes up a fifth of the island. And carnival on Aruba is something else.

When I think of Aruba, I see sun, white beaches, a light-blue sea and many tourists. During our nine days on the island, we found out that there is much more to explore. Aruba is only 31 km long and - at its widest point - 9 km wide, but during our trip from north-west to south-east on the island, we have seen different "faces". We also saw that Arubans really love carnival.

After a nine-hour flight, we land on Aruba, one of the three leeward islands of the Dutch Antilles. When we leave the arrival hall, we are welcomed by a hot sun and a strong north-eastern trade wind. Bon Bini ("Welcome"). The transfer from the airport Reina Beatrix to Palm Beach takes approximately 25 minutes. The drive takes us through the capital Oranjestad, Eagle Beach and Manchebo Beach to our accommodation in Palm Beach.

Because of the five-hour time difference we have all afternoon and we install ourselves near the swimming pool. In the evening we take the Arubus (public transportation) to Oranjestad, the drive to the bus terminal takes 10 minutes. 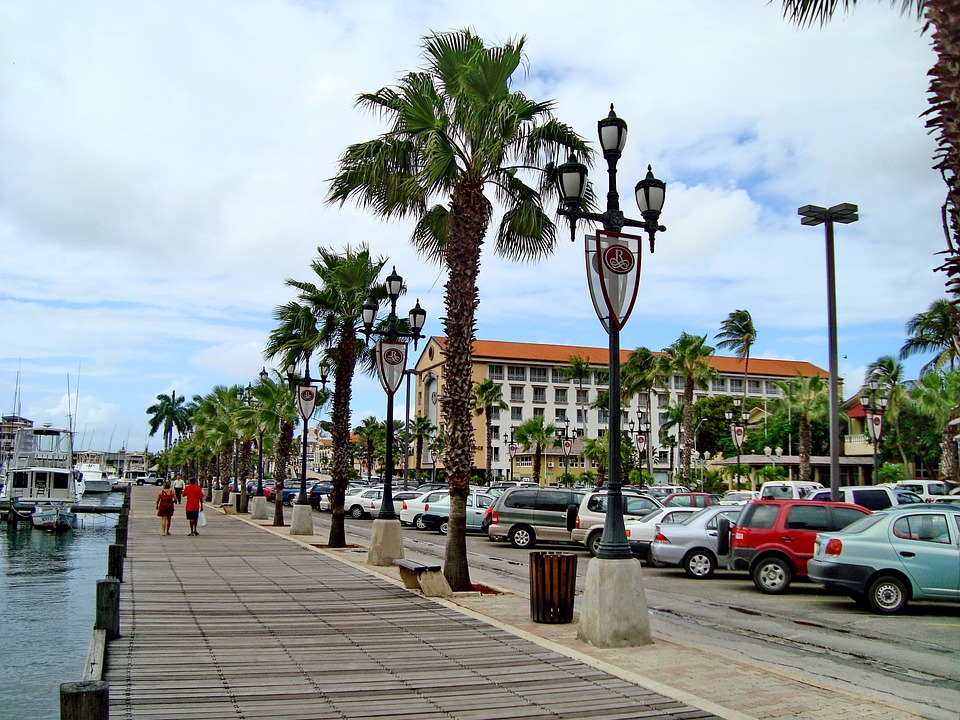 Immediately behind the bus terminal and opposite the cruise ship terminal is the Royal Plaza Mall, which we call "Pink Sugar Palace" during the rest of our stay. It is a large, kitschy building, soft-pink, with lots of stores and jewelers which mainly cater to cruise ship passengers. This is cruise season and three times a week one or more cruise ships dock in the port of call which we will see later this week. It gets dark early and increasingly crowded, this Saturday night.

The carnival celebrations have started end January, but today the main big parade takes place; it's called the "Gran Marcha." The parade starts at 11 AM near the stadium, and will arrive in Oranjestad by 1 PM. We make sure we're in the capital by 12 PM to find a place in the crowds. We didn't expect that we'd have to wait for one and a half hours in the scorching heat and have to remain on our feet until 6:45 PM.

Finally we hear music in the distance and then it doesn't take long for the parade to arrive. The crowd, we too, are like little children, eagerly awaiting the long-expected parade. It is definitely worth the wait. There are different carnival groups in the parade and all participants wear beautiful costumes, with or without feathers, in bright yellow, shocking pink and other cheerful colors. Some costumes cost over 5000 dollars. At least, that's what we hear.

People are dancing and jumping enthusiastically to the rhythmic live music. It's quite different from carnival as we know it in The Netherlands. The Aruban carnival is a real folk festival. If you're on Aruba you shouldn't miss the parade. Just before sunset the parade ends, we had a great time. All of Aruba is in Oranjestad, so we don't stay and take the bus back to our hotel.

Next day our legs are still tired of standing for such a long time and we spend the day on the beach to recuperate.

Tour of the island

For a tour of the island, we can choose from mountain biking, horse riding, jeep safari or coach. Of course, we could rent a car, but that would have to be a 4WD because only the western part of the island has paved roads. But if we'd have a flat tyre in the "kunuku" (= inland), we wouldn't be able to change it ourselves, so this is not an option. Another reason we prefer an air conditioned coach is that the sun has done its work during the carnival parade. We don't want to get an even worse sun burn.

Our English-speaking guide takes us and a group of Americans from the Old Mill via the rich neighborhoods Malmok and Arashi Beach to the far north-west of Aruba. The Old Mill ("Olde Molen") originally was brought from Frysia in The Netherlands dating back to the 19th century. Around 1960 it was brought to Aruba and over the years housed a museum and a restaurant. Currently it's being renovated so we can't take a look inside, unfortunately.

On the way the guide tells us that all of Aruba's beaches are now public. There are no more private beaches. But that doesn't mean one can swim everywhere. The white sand beaches on the west side are quiet having clear-blue waters. But on the east coast the sea is dark-blue and wild. There are volcanic rocks on east coast beaches. The guide tells us not to swim or dive there. In Eagle Beach and Manchebo Beach on the west coast one can't swim everywhere either, because of dangerous undercurrents, but the beaches are still very pretty.

Before we visit the lighthouse, we take a drive through the mansion village Malmok, where prices for houses with or without swimming pools start at $350,000. The guide tells us that the nearer a house is to the sea, the more expensive. Everyone can buy a house here, he lets us know, in case we're interested. The median income on Aruba is around $14,000. We are surprised to find out that the palm trees here are imported. That’s what our guide says.

We can clearly see that Aruba is not flat, but hilly. In the distance we see a high mountain, Seroe Plat. On the way we'll see several hills and mountains, like the Hooiberg ("Haystack") and Jamanota. The lighthouse was built between 1914 and 1916 and behind it sits the former lighthouse-guard house, which now serves as a restaurant. The sand dunes behind the lighthouse form a sharp contrast with the surrounding barren landscape.

We drive along the golf course Tierra del Sol. The guide tells us that the golf course was designed by an American and that it's an expensive project, because it needs much water. The rain season is from October through March and during the rest of the year it's dry.