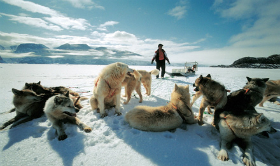 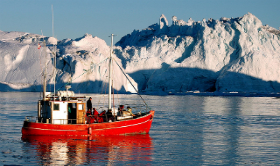 Greenland is the world's largest non-continental island, in the far northeast of North America, largely within the Arctic. Although it is still part of the Kingdom of Denmark, it was granted self-government effective in 1979, more recently it voted for more autonomy, in effect making it a separate country with formal ties to Denmark. Some inhabitants are now projecting the eventual road to independence. Copenhagen remains responsible for its foreign affairs, and of course is a source of investment. The closest neighbouring countries are Iceland to the South-East, Canada to the West and Svalbard in Norway to the North-East.

Although some maps with flat projections of the globe tend to make Greenland look the size of Africa, it is actually "only" about the size of Mexico. Greenland has the world's lowest population density. It represents some 97% of the area of the Kingdom of Denmark. The Danish territorial claim is rooted in the 10th-century explorations of the Vikings, though administrative power has changed hands several times over the centuries due to developments in Europe. The native Greenlanders, or Kalaallit, are Inuit descendants of nomads from northern Canada. ("Eskimo" is offensive in Canada and Greenland, but not in America.)

According to the Icelandic Sagas, Erik the Red chose the name "Greenland" to entice settlers from Iceland. In fact, Greenland has far more ice cover (about 84% of its surface area) than Iceland does, but the southern coasts the Vikings settled are green in summer, and were likely more so during the Medieval Warm Period.

Be careful with maps of Greenland, as many Greenlandic names simply reference a particular geographical feature. For example, "Kangerlussuaq" means "Big Fjord" and so is not only the Greenlandic name for Søndre Strømfjord.

When visiting a city or village don't be afraid to ask for directions of shops, places to eat or somewhere to sleep, even if you think there might not be any. Most places (even Nuuk) are small enough for everyone to know where everything is, and therefore no one bothered to put up a sign. Don't be surprised to find a fully equipped supermarket inside a grey factory-like building in the middle of nowhere.

Greenlandic places generally have two names: the (traditional and now official) Greenlandic, or Kalaallisut, and the (once but no longer official) Danish. Greenlandic is abbreviated 'kl;' Danish is 'da.'

Tasiilaq (also Ammassalik, for its municipality and the island it is on) - the largest city in Eastern Greenland

The Summit - the highest point on the ice cap, and a very inhospitable place, but nonetheless well visited by scientists drilling into the ice

Southern Greenland - Nicknamed "Sineriak Bananeqarfik" (Banana Coast) by the locals, this is the most easily accessed part of Greenland and the one subject to the least extreme temperatures

Location of the capital Nuuk (Godthåb).

Sparsely populated, the gateway to the national park

Northern Greenland is the northernmost inhabited region, much of it occupied by the Northeast Greenland National Park