A Visit In Ghana 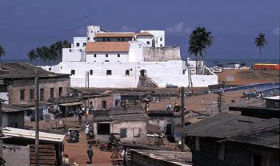 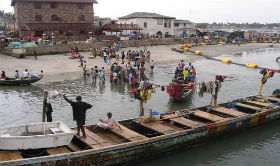 It was breezy late afternoon as I descended boarding EK 781 in the fertile soil of Ghana, a country in Western Africa. Indeed, it was my first visit to an entirely Black African nation with hospitable people. The uniqueness of humidity caught my attention next as we steered through traffic. Accompanied by my Ghanaian lawyer from the airport going to the place I was to stay.

Ghana has a typical tropical climate: two rainy seasons in the northern part from March to June and September until November; and two dry seasons, the first starts in July and ends in August; the other begins in December and ends in February. The coastal belt of the east is warm and comparatively dry, whilst the southwest is hot and humid including the rain-forest areas.

Ghana has an area of 91,843 sq. miles and is located just north of the equator. Its neighboring countries are the Cote d'Ivoire to the west, Togo to the east and Upper Volta to the north and northwest. Half of Ghana is at least 500 ft. above sea level; it stretches from the Gulf of Guinea to the edge of the Sahara Desert.

The Gold Coast (Ghana's colonial name) was a British protectorate. Accra, the capital, is one of Africa's popular cities. The name Ghana was chosen for the Gold Coast on the presumption that at least a few of the Ghanaians were descended from inhabitants of the ancient Kingdom of Ghana, which had existed in Western Sudan (now Mauritania and Mali) in the 10th century. Despite its numerous ethnic divisions and languages that include 56 dialects, English is chosen as the official and commercial language. Among Ghana's important linguistic tribal groups are the Akans, Fanti, Ashanti, Guans, Ga and the Ewe-speaking people. The Ga, Akwapim and Nzima (a group of tribes in the south) harmoniously created a strong tribal union; the British introduced modern education, commerce and administration in the southern districts of the country. Also, southern ethnic groups were politically united with the result that modernization occurred much more quickly in the south than in other regions of Ghana.

Ghana is a tourist nation with a mixed culture of African and European. Several transients from Belgium, France, and the Netherlands and other countries across Europe used to visit this country for recreational tours and sightseeing. The famous Cape Coast and the Elmina Castle built by the Portuguese in 1842 (first among such castles along the coast), commemorates the historical trading of gold dust and permanent trading base of the Portuguese. The gold trade was later replaced by the trading of other lucrative commodities, slaves. Nonetheless, Ghana still has a plethora of gold, manganese, diamond, bauxite, and is also one of the largest cocoa producers in the world.

In the 18th century, the British, Dutch, Portuguese along with other countries in Europe regimented certain areas of the coast. And later in the 19th century, withdrew its trade interests with the exception of the British who took full control of the coast and became involved in series of wars with the Ashanti tribe, the largest in Ghana. The illegal trade of slaves was terminated by the British Government in 1807. Ghana was then named Gold Coast Colony by the British: it was annexed to the British Crown in 1886 during the time of Queen Victoria.

I was taking my meal in the hotel's restaurant, when some European guests joined my table and conversed with me. Among them were a Dutchman, 2 Belgian ladies, and a French linguist. We sojourned in the same hotel and shared each other's perspectives about Ghana during dinner. I found out that they came often to Ghana to visit. Aside from having leisure and recreation, they found Ghana to be very safe.

Festivals in Ghana are marked with beach parties, for example, on New Year's Day and the Rice Festival at Akpafu in the Volta region. Most Ghanaians are Christians, at least 69% of the population, 16% of the population are Moslems, while the rest of the population is still practicing traditional religions. Parliamentary democracy is the system of governance, as mining, lumber, cocoa and light manufacturing are the major industries; the U.S., U.K., Germany, France, Japan and South Korea are the major trading partners.

The major ethnic groups; Akan 44%; Yoruba 1%; Moshi-Dagomba 16%; Ewe 13%; Ga 8%; Gurma 8%; European & other 1.5%, lead to one Ghana Republic with FREEDOM and JUSTICE declared on its sovereign will. Places of interest such as the Cape Coast and the Elmina Castle are situated along the Central Region of the country. Transients and visitors, however, are required to have a visa with an exemption to those citizens belonging to the Economic Community of West African States (ECOWAS); such as Nigeria, Cote d'Ivoire and Mali, which only requires valid Identification upon entry.

Ghana has a stable economy unlike other African States. This is according to a reliable source of information relayed to me by one of the important personalities of the nation. However, risk in Ghana must be given great importance especially to visitors and tourists. At least 20 persons every 24 hours are being infected with HIV in Ghana.

Rampant and unbridled AIDS in Africa is, indeed, one of the indecipherable predicaments of the regime particularly in the AIDS-affected countries. Furthermore, the Ghanaian Government with the support of the Ministry of Health is engaged in a strong campaign against AIDS. It is then extremely important to every visitor and foreigner in this country to be cautious and wary to avoid harm; and to take precautions against this fatal and morbid malady.