Another Day in Panama 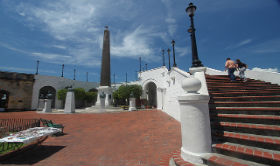 Bright and early in the morning we were off to see one of the great Wonders of the Modern World, the Panama Canal. The Miraflores locks, circa 1913, are not far from the city center and always a highlight. These are the first of the canal’s three sets of locks which stand at the Pacific entrance to the Panama Canal. They raise and lower ships over 16 metres (54 feet) in two steps. We were told morning was the best time to catch a cruise ship in transit, as they like to start early so their passengers get to experience the canal during day light hours.

When we first visited the canal there was just a simple room where you could step inside and view a short film on the history of the canal. Now there is a large new Visitors Center (Centro de Visitantes de Miraflores) which is open daily 9 a.m.–5 p.m. Adult admission is $8. Inside is an impressive display of Panama's history. It's a four-story museum with an observation deck and a theatre that shows documentaries on the canal in English and Spanish. There is a restaurant with a view of the locks and although it came recommended I found it a little pricey compared to other great restaurants in the city.

Most people don't even notice the small snack bar on the first floor. You have to go out the other side of the museum on the canal side. The snack bar is a window opening from the building immediately to your left. Be sure to hold onto your entry ticket as there are separate automated entrance turnstiles for the museum and theatre. On the first floor the museum has a history of the canal, beginning with the failed French effort and following through the completion by the United States.

The second floor has an ecological exhibit demonstrating the importance of the Panama Canal watershed. It includes displays on the flora and fauna found in the watershed. The third floor explains the operation of the canal and includes a full-scale simulator for ship pilot-training. There's also a large topographical canal map which looks a lot like the one they had in the old theatre room. The fourth floor display is a little sparse and boring for the kids. It has route maps and discusses the importance of the canal and world commerce.

A little further drive up the east bank of the canal you will find the Gamboa Rainforest Resort. It's a pretty pricey place to stay or eat. But, if luxury accommodations and gourmet dining in the rain forest are not in your budget, don't despair. You can still plan a day trip to Gamboa and take in its many ecological tours al la carte.

On our first visit we took the Aerial Canopy Tour and checked out the 5 exhibits which showcase local flora and fauna as well as a replica of an Embera Indian village. I have to say we were a little disappointed in the Canopy Tour. It was pretty cool but it didn't produce any bird or wildlife spotting. Our guide explained that we had come at a time of the year and a time of the day when the wildlife was quiet. Later we learned that one of the best tours was a visit by boat to Monkey Island.

Although we didn't catch it on our first visit, on a subsequent trip to the city we hiked our way up Ancon Hill. It rises 654 feet from the bay and for 400 years has been a key geographical reference point in Panama. The commanding 360-degree view of the city, Casco Viejo, the Pacific Ocean and the entrance to the Panama Canal make it a great place for taking photos.

My wife always says, "A trip to Panama City is never complete without a day or two of shopping." We discovered two beautiful modern indoor malls. The Multi-Plaza and Multi-Centro are relatively recent additions to Panama City and boast some of the best shopping in Latin America. The Multi-Centro is located in Paitlla, one of the wealthiest areas of Panama City. It's also billed as the largest shopping mall in Central America. In Multi-Centro you will find a casino, movie theatre, arcade, internet cafe, bookstores, 3 department stores and many more shops. It is also connected with the Radisson Decapolis Hotel. The Multi-Plaza is similar and is connected to the Marriott Courtyard (one of my favourite places to stay in PC). The Multi-Plaza has a similar selection of shops and also has a couple of great restaurants. Paladar serves a wonderful selection of dishes and for those missing home you can check out Tony Romas.

A great place to spend your last night in Panama City or any night for that matter is the Amador Causeway. The night time views back to the city lights are spectacular. Go out a little before sunset so you can stop by the Smithsonian Tropical Research Institute. It's also fun to rent a bike and ride the boardwalk. Check out the shops on Isla Naos and after you have worked up an appetite and the sun has set continue out the causeway to Isla Flamenco where you will find the marina and the Flamenco Shopping Plaza. Get a table outside at Alberto's. You can enjoy great food and drink while admiring the mega yachts in the marina with the city skyline behind.

Mark has been there and done it! He moved to the warm, stable Republic of Panama. With his wife and two sons he travelled throughout the country and learned how to Safely Invest in Panama Real Estate. Now you can follow the journey discovering the best places to eat, stay, live and invest. Discover Panama now at www.LearnAboutPanama.com. Article source www.travelarticlelibrary.com.